Description of Tailor made tour of Jordan & Israel

US $2650 excluding flights
Price includes: accommodation, tours & meals where indicated.
Prices vary according to standard of accommodation & season & are per person based on 2 people sharing on bed & breakfast basis.

2 minute summaryBest time to go
Cant decide between Jordans desert archaeology and Israels significant cities? You can visit both countries with ease on a guided tour. In Israel a...

2 minute summaryMap & highlights
History vacations suffer from an image problem. They conjure up a picture of a sedate older crowd crammed into coaches, ticking off a list of antiquity...

4 Reviews of Tailor made tour of Jordan & Israel

The top 3 parts of the vacation were Petra, Jerusalem and Dead Sea. Read full review

Every moment was a memorable moment...Jerash in Jordan was a surprise...Petra Kitchen was a lot of fun ...Dinner at Fauzi Azar Inn, and singing and dancing at Bedouin Camp was great too! Read full review

9/10...Jordan - particularly Petra which lived up to, and surpassed its reputation Read full review

RSCN
RSCN is a non-government organization devoted to the protection and care of Jordans wild plants, animals and natural landscapes. Wild Jordan is the part of RSCN responsible for socio-economic growth projects, including all eco-tourism and handicraft enterprises that link the protection of nature with improving the livelihoods of local communities.

Jordan's Royal Society for the Conservation of Nature is for the benefit of the local community and is an important source of employment and education in the local region. Two of the reserves featured in this tour are The Dana Nature Reserve and the Wadi Rum. The RSCN also operates a handicraft center and locally produced goods as well as organically grown herbs and preserves are available in local shop.

Wadi Rum
Preserving the pristine wilderness: there are no hotels in Wadi Rum itself but many local Bedouins offer tourists an overnight stay in their tents in the middle of the desert. Relatively few of Jordan's Bedouin still follow the ways of their ancestors. Most have settled in cities and towns and are found in every walk of life.

Yet low-slung black tents and pack camels have not vanished from the landscape, and many travelers find a shared meal or coffee with traditional desert Bedouin to be their most memorable experience. Naturalists will be drawn to the desert in springtime, when rains bring the greening of the hills and an explosion of hundreds of species of wild flowers. Red anemones, poppies and the striking Black Iris, Jordan's national flower, grow at will by the roadside and in more quiet reaches.

Stay in a genuine Bedouin camp in the desert, with traditional food, accommodation in tents and entertainment around a well lit bonfire. You can also hire a local Bedouin guide who will offer you either a 4WD vehicle, or for the more adventurous a camel ride, to explore the area.

Taybet Zaman Eco Resort, Petra
Located 10 kilometres from Petra, the village of Taybet has been converted to a 5 star resort with the support of the local community. The old village was almost deserted as the community had moved away during the 1960s, and in the early 1990s the mayor proposed turning the old village houses into a tourist resort, rebuilt and owned by the local community. The end result was a recycled village, owned, rebuilt, and run by the locals, keeping the community and its heritage alive and spurring growth. There is a Turkish bath and a restaurant serving traditional Arabic meals as well as a small market area which sells locally produced pottery and textiles to keep alive old crafts skills and bring employment and money to revitalise the villagers.

Taybet Zaman was restored with respect to authenticity of materials, environment, and regional style resulting in a preservation of culture, recycling of materials, offering a rustic and local Jordanian experience to its guests. Since its completion in 1994, Taybet Zaman has won numerous awards, including the 1996 British Airways Tourism for Tomorrow Award and the 1997 Green Global Commendation Award.

Feynan Wilderness Lodge, Dana
Feynan Lodge has been developed by Jordans Royal Society for the Conservation of Nature and opened in the summer of 2005. It is set among the arid mountains of Wadi Feynan on the western border of Dana Nature Reserve. The lodge, also known as the Wilderness Lodge, has been set up as a cool, atmospheric retreat for tourists wishing to explore this undiscovered and archaeologically rich area of Jordan. It is an interesting piece of architecture built entirely of local materials and designed by a local architect. The unique arabesque desert design uses traditional adobe methods and lends a romantic feel to this remote location. The RSCN have been keen to incorporate some eco-friendly technologies, which include solar power by day and candlelight at night. The staff are all from the local Bedouin community which makes it an important asset to this remote area.

Petra Kitchen
The Petra Kitchen offers an evening of learning, fun and a very special dining experience allowing you to recreate some of the traditional Jordanian dishes for yourself, alongside some of the local women. Great care has been taken to make The Petra Kitchen a truly Jordanian experience - right down to the furnishings which are all crafted in Jordan, the tableware which is all produced by the Iraq al Amir Womens Co-operative and the aprons & table linens which are all hand-embroidered by the Jordan River Foundation.

Above the Petra Kitchen, there is also a small fair trade shop selling handicrafts made by local artisans which are of a very good quality and are often entirely unique items. A lot of these items are made by local women in their homes or by members of charitable organizations set up to support local women, so buying items here helps these women but also helps inject money into the local economy.

Local guides
As a company, we have a policy of staying in locally owned accommodation wherever possible and our ground agents employ local guides using transport owned and operated by local people. Lunches are eaten in locally owned and managed restaurants thus supporting the community financially. This provides valuable employment to the region and keeps the money you spend in the country, helping to maintain and develop the infrastructure. 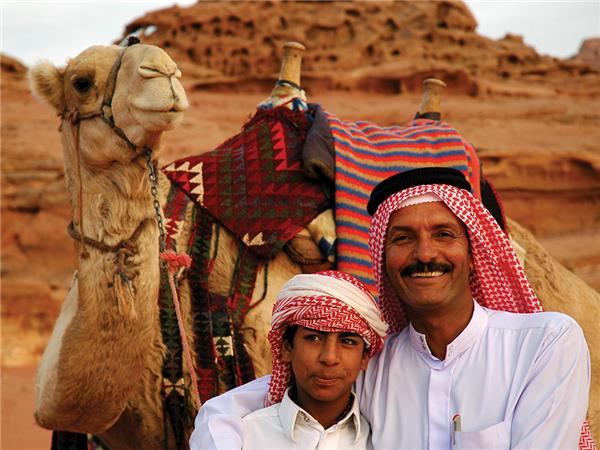