The culture on Gozo

Gozos culture is influenced by its rich history and location on trading routes. The Neolithic site of the Ggantija temples dates from about 4000BC has huge stone megaliths and nearby beautiful statues and is an area of great archeological significance. Gozo was colonisied by the Romans, Turks and later the British but now has a distinct culture all of its own. Gozo culture in the modern day center around the local arts and crafts, the Catholic Church and family is perhaps the most important cultural and social element of Gozitan society.

With its rich diverse history, and strategic location on the oldest European maritime trading route, the culture of Gozo has been influenced by the most powerful civilisations of the Mediterranean basin. The island was first settled some 7000 years ago by neolithic people who are believed to have come from Sicily around 5000 BC to create a simple agrarian society. However, the discovery of glazed pottery shards in caves on Gozo's northern coast suggest that they possessed a considerable degree of technical and artistic sophistication. The temple building society which followed in about 4000 BC, built the extraordinary Ggantija temples which predate Stonehenge by 1,000 years.

The complex construction in huge limestone megaliths demonstrates not only an advanced engineering knowledge but also a complex social structure capable of mobilising sufficient manpower from an estimated total population of 2,000 people to move the immense 50 ton blocks.

Beautifully made statues - excavated from an underground burial site close to Ggantija indicate that for this society cultural and artistic activity was of considerable importance.

The following civilisations which occupied the island, from the Roman and Byzantine through to the Arab conquest of the 9th century added yet more levels of complexity to Gozo's culture yet perhaps the arrival of the Knights of St John in 1530 brought one of the largest and most lasting changes.

Following the terrible siege by the Turks in 1551, when the Cittadella was sacked and most of the island’s population taken into slavery, a new wave of building took place as the Knights strengthened the fortifications of the island, introducing baroque architecture for the first time. Here local masons were able to excel, continuing the long tradition of working with the soft limestone of the island which had been refined during the Arab occupation, producing the fine embellished facades and balustrades which can still be seen today.

Nowadays, with new houses still being built in the local honey coloured stone which is often embellished with traditional patterns and designs the island masons are well known for their skill and the excellence of their work.

The lengthy British colonial occupation was to have one of the strongest influences on Gozitan culture. Not only with the introduction of English, which today is the second language spoken by most of the population after Maltese, but also in the education and administration systems, and even cuisine; the chutneys popular on the island are a legacy of the many British troops who had served in India and who were posted here. In the 19th century most colonial investment would be concentrated on the strategically vital Grand Harbour of Valletta in Malta, but in the 20th century increasing demands by islanders forced the British to pay more attention to Gozo. Here, the Catholic church, always an important part of the spiritual and cultural facets of Gozitan life, played a significant role by lobbying the colonial authorities in the capital, and taking on in effect the role local government; organising for example the creation of an orphanage, a school for the deaf and hastening the electrification of the remoter villages of the island (hamlets near Sannat in the southwest of Gozo for example did not have electricity until the 1960s). 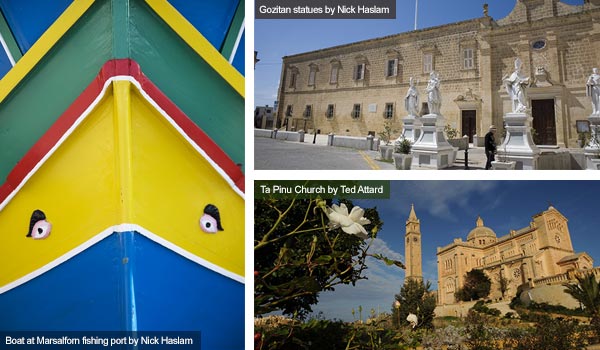 Migration has always had an important impact on the cultural life of the island as economic recessions forced the men to seek work in Malta, or further afield. The womenfolk who remained behind had to be especially resourceful, not only in actually managing their households, but also in simply making ends meet until the first remittances arrived from their absent sons and husbands. Many of the traditional cottage industries which form a significant part of Gozo’s cultural heritage stem from this economic role played by women, from weaving fabrics to clothe their children to making lace to produce much needed income.

The impact of the mass migrations from the island over the past century can still be felt for many Gozitans who left to go to Australia and America (as can be seen from the numerous houses named after Australian and American places) have returned to retire in the beloved island of their birth. They bring with them not only a wider international connection, but also a reaffirmation of the family as perhaps the most important cultural and social element of Gozitan society.

With a population of approximately 30,000, there has always been a complex net of family connections extending across the island which has created a trusting society where people can rely upon each other, and where help is always there if needed. The Catholic church in addition, still plays a very important role in the island’s social and cultural life. In the past when many were illiterate, the parish priest would have read letters written home from family members working abroad, maintaining important family bonds. Today, the priest is still a significant figure in society, and the parish church is at the core of the festas or feast days which take place nearly every weekend in towns and villages throughout summer and which are the most important events of Gozo’s social and cultural calendar.

Here, in a fascinating blend of both secular and sacred, traditional and modern, young and old worship and make merry together on their local saint’s day, carrying the religious statue around the town and then feasting late into the night with loud firework displays in a celebration of the best and most binding aspects of deeply rooted cultural traditions. Coupled with the band clubs, the musical ensembles which also are important social centers in most villages, and the two thriving opera halls in Rabat, which strive to outdo each other in the richness and beauty of their productions, the cultural life on Gozo is surprising in its depth and variety.