Religion on Gozo has had an interesting history stretching back to the original settlers 7000 years ago who built the Ggantija temples. During the Arab occupation in the 9th century Islam was the predominant religion co-existing with Christianity. Through medieval times and up to the present day the main religion on Gozo has been Catholicism. Approximately 60% of the population attend church every Sunday and religious feasts and festivals are an integral part of the culture.

The oldest standing stone structures in the world at Ggantija suggest that the first settlers of Gozo engaged in pagan worship of some kind. Called the Giants’ Temples, these impressively massive constructions seem to have been used as a place of ritual which included animal sacrifice, judging from bones discovered during excavations.

The first tangible proofs of the existence of religion on Gozo date from the Carthaginian period, with the discovery of inscribed statues dedicated to deities in Malta, and during the Roman era, when temples were built, the Cittadella for example, being the site of a temple dedicated to the goddess Juno. According to the Book of the Apostles, Christianity first came to the Maltese archipelago in 60 AD, when St Paul was wrecked on the coast of Malta, but the first churches for Christian worship were built later in the Byzantine era when some form of ecclesiastical hierarchy was established.

During the Arab occupation from the 9th century Islam was the predominant religion on Gozo, but Christian practices were tolerated, as proved by the recent discovery of documents referring to a Christian church and bishop when the island was conquered by the Normans in 1127. This suggests, that as in Sicily and other Arab possessions, differing faiths were allowed to peacefully coexist at the time.

The church became particularly important for the people of Gozo during the medieval era when the island was under the rule of the Sicilian kings. In times of hardship or famine, priests would intercede with the local feudal lord, and even send envoys to the court in Sicily to plead for the islanders and to protect them from excessive demands for taxation. In 1350 the church, now with permanent representation at the royal court became very important in the creation of social structures on the island, setting up schools and during the era of the Knights of St John, creating hospitals for treatment of the sick. The pivotal role the Catholic church displayed in Gozo’s development continues through the period of British rule, when the island, with little military significance, was largely ignored by the colonial office which concentrated on developing the large naval bases in Malta. 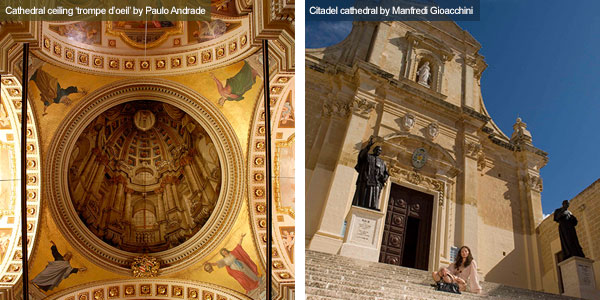 In the 19th and early 20th century the Catholic church of Gozo, which was autonomous with its own bishop, continued to play a significant function by lobbying the secular authorities in Malta on behalf of the islanders, and creating the first orphanage on the island and also a school for the deaf. During the periods of mass emigration to Australia and the USA during the late 19th and the 20th centuries the church also formed a vital part in keeping families together as parish priests read and wrote letters for their illiterate parishioners, helping to maintain family bonds across the globe.

It is estimated today that some 60% out of the island’s total population of 30,000 still attend church every Sunday, and the intense fervour surrounding feast days or festas, when the statues of the saints are taken in procession around the towns and villages, is a tangible demonstration of the continuing importance of religion to Gozitans. The island’s seminary currently has 23 young men training for the priesthood, meaning that Gozo has more seminarists per capita than any other country in the world. The recent visit by Pope Benedict XVI to Malta, during which he vested the ta’ Pinu Shrine titular painting with a golden rose, and following on the footsteps of his predecessor Pope John Paul 11 in 1990 shows that Gozo and its people are still very dear to the Vatican itself.