St. Vincent & The Grenadines is the perfect vacation for all the family this summer. Sitting close to the equator these islands enjoy a steady year-round tropical temperature. Vincentians are very family orientated and children are a very important part of island culture. With gently shelving beaches, crystal clear warm sea, turtles to snorkel with, nature trails to cycle and a volcano climb, there is plenty to do for all ages

When you are small it's easy to be overlooked. Bigger and brasher neighbours, those that have shouted louder about their beauty, have long ago stolen the limelight from St. Vincent & The Grenadines. That's no bad thing. Outside influences have not tainted or changed these islands as much as the others. The islands are beautiful, they are special because they are unspoiled, but most of all, it is the people who live here that make visits so memorable. The people of St Vincent & The Grenadines are not workers in an island tourist industry; they are a real community that welcomes outsiders.

These islands are difficult to define. Each one is so different yet they claim to be a single country. That's no bad thing. As each island is unique, there's more to discover.

Where?
There are 32 islands in the country called St. Vincent & The Grenadines. Only nine are inhabited, but all are close together; the whole nation covers only 150 square miles.

St. Vincent is the biggest island and is known as "the mainland". It is a lush, mountainous, raindrop shaped landmass, 29 kilometres long and 18 kilometres wide that climbs from the sea to the peak of its active volcano at 1200 meters. 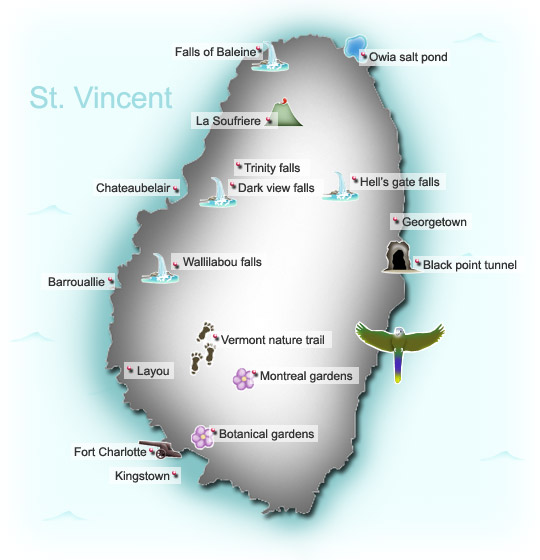 The other islands with local communities are Bequia, Mustique, Canouan, Mayreau and Union. They are all very different, both in how they look and the culture of the people who live on them.

Tobago Cays is a mini archipelago of pristine low lying islands, reefs and lagoons that has been designated a National Marine Park.

Dotted between all of these larger islands are many others of varying size. Together they make up St Vincent and The Grenadines.

Who?
St. Vincent & The Grenadine's history is different to much of the Caribbean.

The indigenous Carib population resisted both French and British colonisation far longer than those on other islands. This made it a haven for slaves who survived shipwrecks or escaped plantations and managed to reach these shores where they intermixed with the original inhabitants.

This independence came to a violent end in 1797 when a war of resistance against British colonisation ended with the deportation of 5000 Black Caribs, first to Baliceaux off Bequia and then to Roatan off the coast of Hondurus.

This history of independence and the mixing of African slaves, indigenous Caribs, French and British settlers, together with Portuguese labourers, has given St. Vincent and The Grenadines a vibrant multi-ethnic community that is both proud and unified.

What?
St. Vincent is a volcanic island, lush and fertile. There's a saying here, "push a stone into the ground and it will grow into something to eat". The land rises steeply from its black sand shores in vegetation covered slopes cut with streams and rivers punctuated with rapids and waterfalls. Around its coastline and inland there are small villages where either fishing or farming is the way that people make their living.

The Grenadines are the white to St Vincent's black, literally. Unlike the volcanic black sands on the mainland, the beaches of all these other islands are platinum white and the seas azure blue. Inland they also have woodland coved hills, but because they do not have the abundant rainfall that falls on the highlands of St. Vincent, nature here is more Mediterranean than tropical.

Contact us - call or email Call us from anywhere No queues or automation Sign up to our newsletter
Photo credits: [Page banner: Jim G]
Back to the top