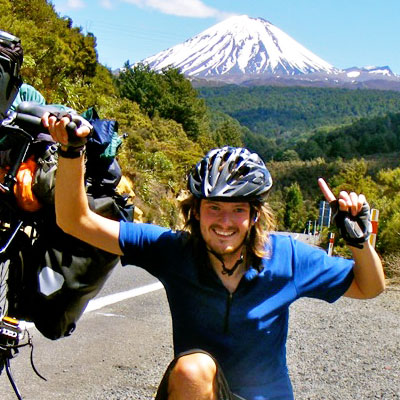 Leon McCarron is an Irish adventurer and filmmaker and specializes in long distance, human-powered expeditions. From his very first journey covering 14,000 miles in 18 months cycling by bike from New York City, to walking on foot through the Gobi desert in Mongolia in -30C temperatures, the only constant in Leons life is that home is constantly changing. Always on the move in pursuit of stories, he describes himself as an idealist and an optimist and thinks travel is an integral part of bringing about social change. We caught up with him along the way during his latest journey through the Middle East  the highlight of which has been watching the stars glow all around him in the Sinai Desert whilst his camel quietly snores next to him!

Wheres home?
Thats probably the most difficult question I ever have to answer! Im from Ireland, and have been based in London for the last few years. Recently I relocated to Muscat, Oman for half the year, but I still spend quite a bit of time in the UK for work. Im also traveling three or four months each year. So, home is constantly changing!

Whats your first ever travel memory?
My mum would take me to the West coast of Southern Ireland, which seemed really exotic because everyone had a funny accent. We lived on the North coast of Ireland though, which was only about 40 miles away, so it shows that experience is all relative!

Describe yourself in three words?
Looking for something!

What inspired you to start traveling?
When I finished university I had no idea what to do next. I was certain I didnt want to end up in a job that I didnt care about. I decided to begin traveling to try and figure out a plan, and I thought that traveling by bike would be a good way to do that. I set off from New York City, over-packed and underprepared, with a years worth of savings and very little common sense. I ended up traveling 14,000 miles over 18 months, and it was undoubted the most formative experience of my life. I realised during that time that it was storytelling that really excited me, and I was determined to try and make a living out of sharing the amazing stories that I came across on my travels.

What do you dream of for our world in the future?
Im an idealist and an optimist, but this is still a hard question to answer without resorting to clichés. What I would say is that we need to change, drastically - we need to put a lot more energy into protecting our planet. When that becomes a priority, I think other aspects that were failing at will improve too. I also think travel is an integral part of bringing about social change, big and small- there are very few close-minded, irresponsible people who have travelled extensively.

Whats been the biggest challenge youve faced on a journey?
Physically, it was trying to cross the Gobi desert in Mongolia on foot, in winter. It was -30C and Id never experienced anything like that before. It was the first leg of a 3,000 mile journey across Mongolia and Hong Kong, and I had to spend two weeks dragging a small trailer behind me with all my food and water. It was awful! I look back on it with fondness now, although Im not sure why.

Mentally Ive had my toughest times alone - often in other deserts and remote parts of the world. Its great to travel alone - we learn so much about ourselves that way - but theres a fine line between solitude and loneliness, and its often a challenge to keep morale high when traveling solo through wilderness for days or weeks on end. 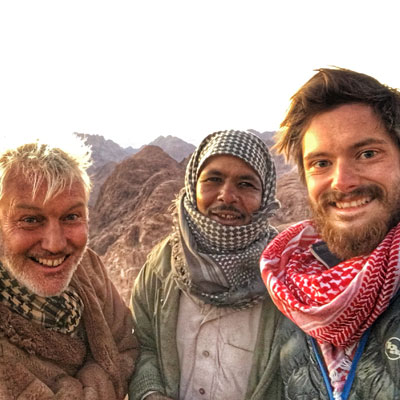 Wheres the best place youve woken up?
I love waking up under a clear sky and seeing the stars, anywhere in the world. Recently Ive been walking across the Sinai Peninsula on my latest journey through the Middle East, and thats been pretty special - seeing the stars glow all around, just above my camel who is quietly snoring beside me!

Is there one person youve met who you feel you were so lucky to connect with?
I often travel to places because the landscapes inspire me to go there, but almost always its the people I meet that I remember much more than any scenery. I increasingly am less interested in empty wilderness, and keener to spend my time traveling through places where I can meet, talk with and learn from as many people as possible. There are so many people that Ive met that I feel luck to connect with, even just on this current journey. Im afraid I cant narrow it down! Everyone has a story and something to teach - I find it a nice challenge to try and draw that out of them.

Has anyone ever told you that you wont make it?
Constantly - perhaps on every journey Ive ever made. If Im planning to do something and I havent yet been told more than once that its impossible, its not a real adventure its probably a vacation.

Tell us about a time when you felt like walking away from an adventure?
Again, I think the desire to give up is a fundamental difference between an adventure and a vacation! Vacations (to my mind) are designed to be entirely fun; to that end theyre predictable. Adventures are very different - by nature they should be challenging and constantly changing. As humans we need change, but we dont always like it. I often feel like giving up - every time I see the next 1,000 metre climb and it is 35C, and Ive already walked 20 miles. Every time I climb in to my tent and every muscle is aching. Every time I take a wrong turn and go five miles in the opposite direction. Its important to feel like walking away so that we can prove ourselves by continuing.

What keeps you going if you ever feel like giving up?
I often imagine the scenario of what would happen if I did give up. I picture the nice parts first - getting home, seeing my friends, eating ice cream, sleeping in a bed. Then I envision about the next stage - wondering what to do with my time. Then I think about the regret that Id ultimately feel - how foolish Id be to give up on such a great opportunity to do something wonderful. When I tune back in to the real world, the one around me on whatever journey Im making, I usually feel lucky to be there again.

What are you most proud of?
The first part of my first cycling trip - riding across America - was my least impressive physically, and certainly the least intrepid, but it was also the hardest because Id never done anything like it before. Im really proud of myself for getting through the first week when I was unfit, naive, lost and scared of everything. Starting is the hardest part - it always gets easier from there. 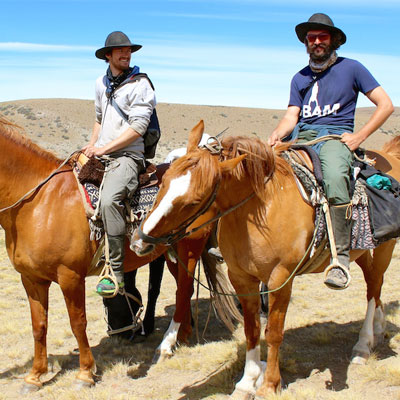 Whats your happiest travel memory?
I loved walking 1,000 miles across the Empty Quarter desert on the Arabian Peninsula. It was incredibly liberating to feel like such a small spec in a monstrously huge landscape, and to have such a simple life - walk, walk, eat, sleep. It was glorious.

Whats always in your bag  no matter what adventure youre on?
Toothbrush, sleeping bag and a hip flask of whiskey. Theres few problems that cant be solved with those!

What do you still dream of doing that you havent yet done?
Id love to visit Antarctica. I also have a notebook full of other journeys Id like to make - cultures I want to explore and things to see. The world is a big place!

Where would you like to be right now?
Right now Im in the Sinai Peninsula in Egypt, close to the end of a 1,000 mile walk that has taken me through the heart of the Middle East. Im with a camel and two new Bedouin friends, and Im in a small oasis town. This is my first night inside a building for two weeks. This will do me just fine - I dont think theres anywhere Id rather be!

In your lifetime, wheres the most memorable place youve been and why?
At the end of 2014 I rode a horse across Patagonia along the Santa Cruz river. After weeks of wilderness in the steppe I arrived at the Perito Moreno glacier, which fed the lake and the river that Ive followed since the Atlantic Ocean on the far side of Argentina. Ive rarely seen and felt the true majesty of nature as clearly as I did then.

What does responsible tourism mean to you?
It can be distilled down to respect - a respect for the world around us, both the environment and the people who populate our planet. We have a responsibility as travelers and tourists to not only make sure we dont have a negative impact on the places we go, but also to try and leave something positive behind. This can be as simple as a kind gesture, or putting some money into the local economy, or it can be taking a more active role in an issue that we feel close to. As I see it, the two are intrinsically linked - there should be no tourism without responsibility.

Read more about Leons adventures in the Middle East here
Read all our folks we love interviews & be inspired!
Back to the top