Our Easter Island travel guide transports you to the worlds most remote inhabited island, formed by submarine volcanoes and where gigantic stone statues stand sentinel around the coast. Read on to find out what Easter Island vacations involve, where to go, and all about the death-defying race to find a sacred bird egg.

Formed from the ash and lava of three underwater volcanoes, Easter Island or Rapa Nui is the most remote inhabited island on the planet. The Rapa Nui people, who erected immense stone sculptures of their chieftains around the coast to watch over them, ironically almost wiped themselves out in the process through deforestation, and in doing so made the moai statues a source of enduring fascination.

Easter Island is a Tintin story come to life  a volcanic island of mystery surrounded by 1,000 stone giants, where a bizarre Birdman cult flourished and the locals revere an unusual rock said to possess supernatural energy.

The island is so named because the first European to land here, a Dutch explorer, arrived on Easter Sunday. But to the Rapa Nui it was Te Pito O Te Henua  the navel of the world  and their ancestral lands now rightly make up the national park which covers most of the island. We may not know the origins of their ancient culture, but that serves only to make this place even more special.
Read our Easter Island travel guide for more details.
See all our Easter Island Vacations

Give us a call
Easter Island is/isn't

as difficult to reach as you might think given how remote it is. A five-hour flight from Santiago makes it ideal as an add-on to a longer Chile tour. 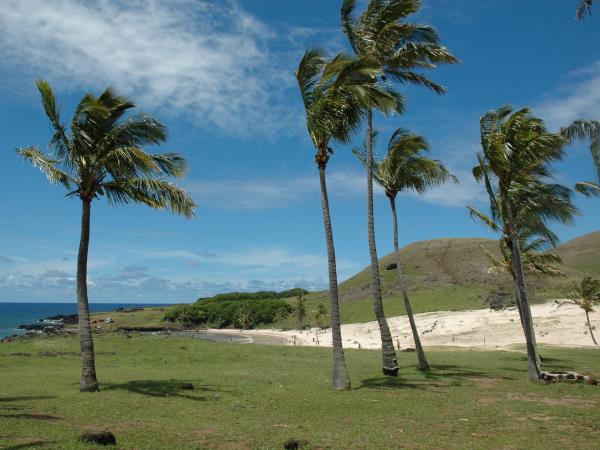 Photograph one of the world's most isolated inhabited islands 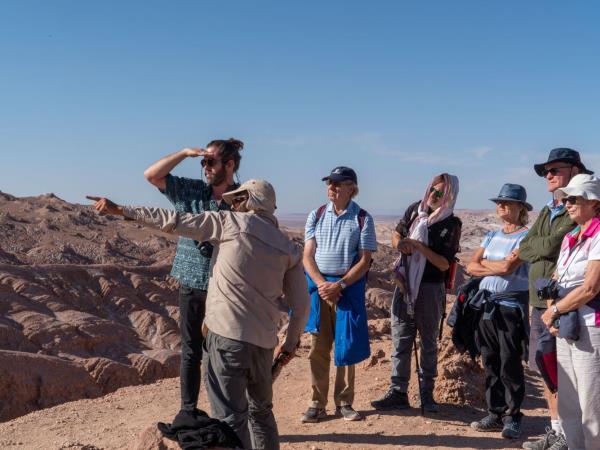 From archaeological wonders to the world's driest desert 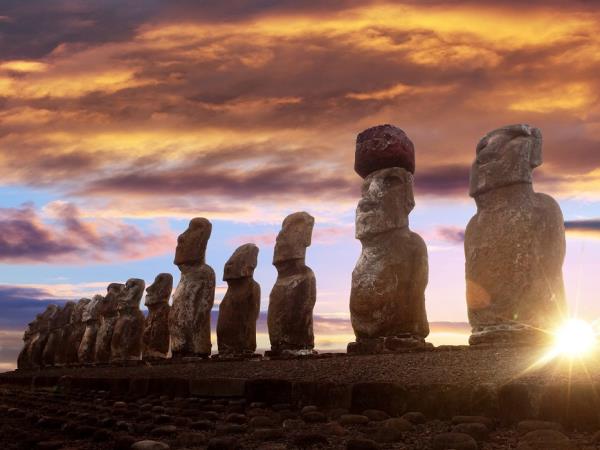 Despite its remoteness, Easter Island is far from inaccessible. A five-hour flight from Santiago will get you there, and longer tours of Chile often feature a few days here. Given that this almost turtle-shaped island is just 25km by 12km, you can get around easily and visit all the must-see locations in a tailormade tour that lasts around five days. Youll stay in locally owned accommodations, usually around the main town Hanga Roa, and get around either by hire car on tailormade itineraries or shared vehicles on small group tours, accompanied by guides from the Rapa Nui community. The early settlers knew Easter Island as the navel of the world  heres how you get innie and outie, and what to do inbetweenie.
1. Ahu Akivi
2. Ahu Tongariki
3. Anakena
4. Hanga Roa
5. Orongo Ceremonial Village
6. Rano Raraku
Ahu Akivi

The seven moai here are unusually positioned looking out to sea, said to be sentinels awaiting the arrival of the king Hoto Matua. They also serve as a kind of celestial observatory, facing sunset during the Spring Equinox and with their backs to the sunrise during the Autumn Equinox. There are also some volcanic caves nearby that can be explored.
Ahu Akivi
Ahu Tongariki

Probably the best place to see sunrise on the whole island, there are 15 well preserved moai at Ahu Tongariki, restored to the seated position after the site was devastated by a tsunami. These include an 86 tonne moai that is the heaviest ever erected on the island. A popular location for photographers, Ahu Tongariki ranks among the most important megalithic monuments in all Polynesia.
Anakena

Easter Island has a handful of sandy beaches, and Anakena is a classic Polynesian paradise. Its said to be where the Polynesian king Hotu Matua first landed in a canoe to settle Rapa Nui, or as the original inhabitants knew it, Te Pito O Te Henua (the navel of the world). Its a great spot for swimming, especially in the mornings when its not crowded.
Anakena
Hanga Roa

The capital of Easter Island and the main town, indeed the only town, Hanga Roa is in the southwest of the island. The majority of the population lives here and the main street, named for a former ruler who signed the annexation treaty with Chile, is lined with hotels, restaurants and shops. A number of moai can also be seen in the area.
Orongo Ceremonial Village

This clifftop settlement was the center of the Birdman cult, and the finish line for the annual egg race, with many petroglyphs featuring the ancient gods. A cluster of round stone houses with low roofs blanketed in grass makes it one of the islands most significant archaeological sites. The Ana Kai Tangata caves nearby feature cave paintings of the manutara bird, key to the Birdman cult.
Orongo Ceremonial Village
Rano Raraku

The moai were carved in this volcanic crater before being transported to the coast. Nearly 400 statues remain here, in varying stages of completion  the tallest 21m in height, almost twice that of any other and weighing an estimated 270 tonnes. The quarry was active for several hundred years before being abandoned, and its definitely among the islands must-see locations.
[Previous] [Next] [Close]

Photograph one of the world's most isolated inhabited islands

From US $5392 5 days ex flights
Tailor made:
This trip is can be tailor made to depart anytime to suit you

See all our Easter Island Vacations
Travel Team
If you'd like to chat about Easter Island or need help finding a vacation to suit you we're very happy to help.

By the early 19th century all of the moai statues had been knocked over, and it remains a mystery why. The rise of the Birdman cult, and belief in the god Make Make, is thought by some to be the reason the Rapa Nui people discarded their ancestral protectors.
One aspect of the cult was an annual competition to determine who would be Make Makes representative on Earth, involving a dangerous race to secure the first egg of the season laid by sooty terns on the nearby islet of Moto Nui. Young men of the village, known as hopu, would swim across with the aid of reed floats, a distance of some 1000m through rough, shark-infested sea. Bringing provisions with them, they would then wait days, sometimes weeks, for the birds to lay.
Once a hopu had claimed the first egg, he would climb to the top of the rocks and wave it at his sponsor waiting back at Orongo, shouting: Go paint your head, you have got the egg! If he survived the swim back to Rapa Nui it was a scary climb up the sea cliffs to present the egg to his sponsor, who would then be named Tangata Manu, and retreat to a ceremonial house to spend months in seclusion. The Tangata Manu shaved and painted his head red or white, wore a headdress of human hair, and grew his nails, perhaps to take on a birdlike appearance, doing little else but eat and sleep. Eventually the cult was suppressed by Christian missionaries but not before many hopu had perished, either by drowning, falling from the cliffs or being eaten by sharks.
So all completely normal there then. 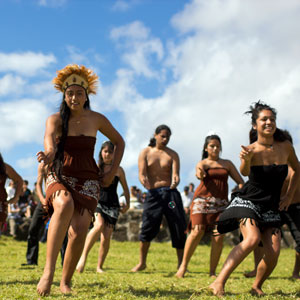 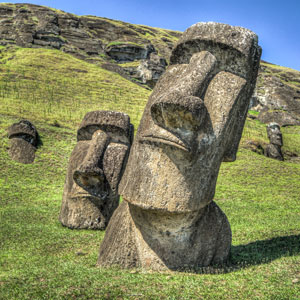 Moai stone statues on Easter Island
The Easter Island moai are among the worlds most recognisable landmarks: giant stone sentinels created by the Rapa Nui people to guard over their descendants.

If youre looking for a Chile travel guide that tells you what we rate & what we dont then read on and discover Chile like a local as well as a brief history that will take you from the Incas in the 15th century to the trapped miners of 2010.