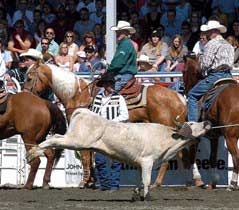 Rodeos and stampedes are often major tourist attractions but the welfare of the animals involved can often be at risk. Our friends at the the Vancouver Humane Society have helped us put together some information about rodeo events so travelers can know the issues and decide for themselves.

Rodeos in North America are promoted as popular reflections of the Old West and many visitors are led to believe they are seeing historical ranching practices and Western heritage. In fact, rodeo is largely based on myth and many of its events are 20th century inventions. More importantly, rodeos have a dark side: animal abuse in the name of entertainment.

In Canada, the internationally famous Calgary Stampede attracts thousands of tourists every year. Yet the heavily-promoted rodeo has also attracted criticism, as animal welfare groups have begun to call attention to the suffering endured by rodeo animals.

The Vancouver Humane Society is not alone in opposing rodeo. So do virtually all animal welfare organisations in Canada, including the Canadian Federation of Humane Societies and the Humane Society of Canada. This is because most rodeo events involve the use of fear, stress or pain to make animals perform. There is also considerable risk of injury or death for the animals. These risks and the suffering the animals endure are considered especially unacceptable, given the unnecessary and frivolous nature of rodeo as entertainment.
The issues
Fear, pain and stress: Animal protection groups argue that rodeo exploits animals' reaction to pain, fear and stress. This becomes obvious when one asks questions such as: Why would a calf or bull charge at full speed out of a chute into an arena full of people? Answer: they are kicked, have their tails twisted or are even given electric shocks. 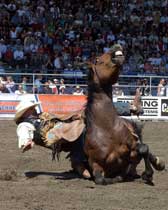 What makes rodeo horses and bulls buck? Answer: A device called a flank strap is tied around the animals hindquarters, causing irritation and stress until the strap is released. Animal activists contend that, were such methods used to motivate dogs in dog agility competitions, there would be a public outcry. Even without physical coercion, the noise, alien surroundings and stress of being chased can cause extreme fear. The distinguished animal behaviourist, Dr. Temple Grandin (who designs slaughterhouses for the meat industry, so no bleeding heart), has argued that fear is so bad for animals that it is worse than pain.

Injuries and deaths: Rodeo animals are injured or killed in rodeos regularly. It was the death of a calf that prompted changes at the Cloverdale Rodeo in 2006. It had been preceded by the death of a steer in 2004 (a cowboy broke the animal's neck during the steer wrestling event). It is difficult to get accurate figures on rodeo deaths and injuries but anti-rodeo activists have compiled a list of incidents from the Calgary Stampede, which shows that since 1986 more than 40 animals were killed or had to be euthanised due to injury. Animal advocates also argue that many painful injuries go unnoticed and unrecorded because bruising and internal bleeding are difficult to see.

Condoning of violence and animal abuse: Aside from what rodeo does to animals, there is also the question of what it does to us. That is, what message does rodeo give to the public, especially children? Most civilised societies rank kindness to animals amongst the highest behavioural values of humankind. From St. Francis of Assisi to Gandhi to the Dalai Lama, great moral figures have cited compassion toward animals as an essential human virtue. Animal advocates say no one could argue that rodeo demonstrates kindness or compassion to animals. On the contrary, they say, rodeo explicitly condones and glorifies violence and brutality toward animals  surely an undesirable message for children.
Specific rodeo events
The criticisms of rodeo (and the defence of rodeo) revolve around the specifics of each event. Following are descriptions of the main rodeo events. 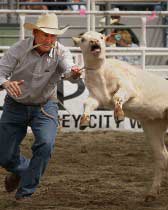 Calf-roping (also called tie-down roping): In this timed event a calf is goaded (this can include tail-twisting, kicking or knocking the calfs head against the bars and the use of electric shock devices) into the arena, followed by a horse and rider. The calf, which runs at speeds of up to 43km per hour, is roped around the neck and violently jerked to a sudden stop. If the animal struggles to its feet it will be lifted up and thrown to the ground by the rider, who then ties three of calfs feet together. The young age of the animal, the in-chute abuse and the impact of the sudden jerking on the calfs neck make this perhaps the most offensive rodeo event. The Cloverdale Rodeos decision to drop roping events followed a calf breaking its leg in this event, which resulted in the calf having to be killed.

Team-roping: In this event two mounted cowboys attempt to rope and immobilise a steer in the least amount of time. The lasso is thrown around the steers neck by one rider and the other ropes the hind legs. The steer is then pulled from each end and stretched to bring him to the ground. Sometimes the steer is stretched so violently that all four feet leave the ground and it is suspended in mid-air by the neck and rear legs.

Steer wrestling: Here, a rider jumps from his horse on to the head and neck of a running steer. He then twists the neck of the steer until it falls to the ground. The steer naturally resists, creating a grotesque scene of a man literally bending an animal to his will. The twisting can result in neck injuries  a steers neck was broken at the 2004 Cloverdale Rodeo and the animal had to be killed.

What you can do: The Vancouver Humane Society advises tourists to avoid rodeo events but to enjoy the country fairs that usually accompany them. The society is calling for a ban on calf-roping (one of the most controversial rodeo events). In 2010, 92 British MPs signed a motion requesting Canada to ban rodeo. But still, well over a million people attended the event in 2015 alone.