Most people come to leisurely wander a few of the five villages, and perhaps if they have time to walk a scenic stretch of the Azure Trail. But Cinque Terre walking vacations take you beyond this over-popular route, further into the hills of the national park and the surrounding countryside. While not neglecting the famous five, they also offer a sublime escape from the crowds that can mar the experience in this lovely part of the Italian Riviera.

As of 2019, if youre found walking in Cinque Terre National Park in inappropriate footwear such as sandals or flip flops, you can be fined by the authorities. Its a result of frustration among mountain rescue services at the number of people attempting what can often be quite demanding terrain and finding themselves needing assistance. But its also an indication that, while the five villages of Monterosso al Mare, Vernazza, Corniglia, Manarola and Riomaggiore are the main attraction on this section of the Italian Riviera, the wider Cinque Terre National Park and surrounding region make for walking vacations with a fantastic mix of challenge and pretty Mediterranean scenery.

The well-known Azure Trail, which links the five villages and incorporates a particularly attractive section between Riomaggiore and Manarola known as the Via dellAmore, is 12km in length and would take approximately five hours to walk, not counting time spent at each village. But the Cinque Terre National Park manages 48 trails spanning around 120km, with a few walks spoking off from each of the five villages. Many of these are well-tended old mule paths, in use for centuries and wending their way through oak forests and shrubland, Ligurian seaside villages, vineyards and olive groves. They lead you past the stone terraces farmers have for centuries employed to grow crops such as grape vines, lemons and apples on steep hillsides, and which are now sadly fallen into disrepair. And compared to the Azure Trail where in peak season youre often walking in lockstep with hundreds of others, further up the paths are perhaps not empty, but certainly nowhere near as busy.
See all our Cinque Terre Vacations 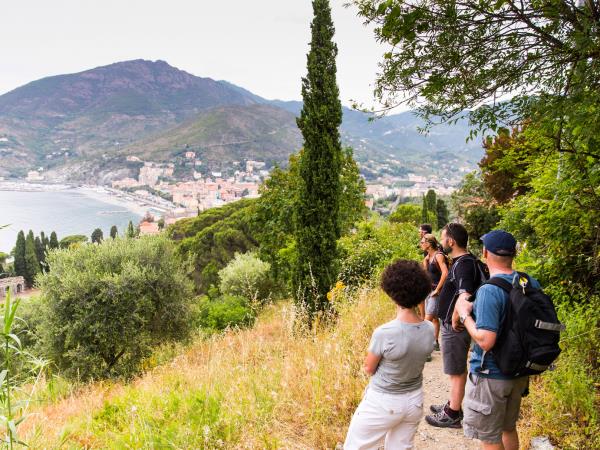 Walk the stunning coastal routes of the Cinque Terre 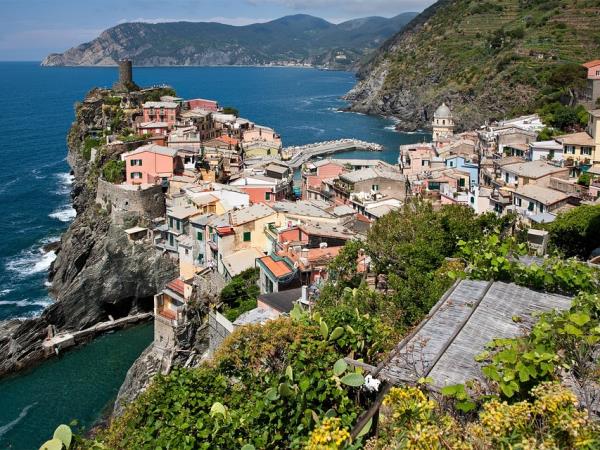 A typical itinerary may involve walking part of, or the entirety of, the Azure Trail on one day, but its only going to be a small part of your trip and quite possibly not even one of the big highlights. These might include Portofino, glamourous haunt of a celebrity jetset from Ava Gardner and Bogie to Taylor and Burton, George Clooney and Madonna; the 16th-century Montallegro sanctuary at Rapallo, often reached by cable car, or Moneglia, with plenty of beaches to relax on. On one day you could be strolling through woodland, the next a string of villages the equal of the Cinque Terre but nowhere near as well-known, and the next to take in landmarks from ancient hermitages to ruined lighthouses, castles and cathedrals.
Some walking vacations combine Cinque Terre National Park with other parts of Tuscany  the verdant Garfagnana Valley; beech forest in the Orecchiella National Park, or even conquering Monte Prado, the regions tallest peak. Others will introduce activities such as sea kayaking (admire the colourful houses of the Cinque Terre from the water as you weave between bobbing fishing boats) and mountain biking. Youre never far from a peaceful hamlet to enjoy a glass of wine in the shade, a clifftop panorama, or an inviting picnic spot. And best of all, youll have all the time you want to snap a photo or enjoy a view, with no-one behind you impatient for their turn.

Walk the stunning coastal routes of the Cinque Terre

See all our Cinque Terre Vacations
Travel Team
If you'd like to chat about Cinque Terre or need help finding a vacation to suit you we're very happy to help.

Part of what gives the Azure Trail such appeal is that its generally very easygoing. To walk further up youll want to be in pretty good shape and ready to handle some steep inclines in places. Consider bringing a walking pole(s) to use. Light hike boots are best for the more difficult part of the hikes., advises Cheryl Wilkins on a tour of northern Italy. The minimum age tends to be 14. Oh, and trainers or boots please, no flip flops!

Your typical Cinque Terre walking vacation is around a week long, and is center-based, perhaps in Moneglia or Levanto, with transfers to / from trailheads included. You could also stay in Riomaggiore, one of the Five Lands. Accommodations will be locally owned and can vary from shared apartments to a family-run farm with an outdoor pool and mountain views. You will be walking between four and six hours each day on generally quite easy terrain, although you can anticipate some tricky ascents and sections with steps. Given Italian tap water is safe, youll be encouraged to bring a reusable water bottle that can be topped off in local cafes and restaurants along the way.

Small group tours operate between April and October, and are led by guides drawn from local communities  expect a sociable, easygoing and motivational atmosphere as appealing to solo travelers as couples of groups of friends, and a great way to learn more about the regions culture and nature through someone who can introduce you to villagers and their lives. A walking tour in Cinque Terre National Park helps ease the pressure on the overcrowded main villages, but it does much more than that. Youll be eating locally grown produce in locally owned restaurants, and sleeping in locally owned accommodations, creating opportunities for people so that they feel less of a need to move further afield for work. So you get to learn much more about real life here than you would following an umbrella around on a cruise ship day-trip, and you get to tuck into excellent regional food and wine every evening. But you also get the knowledge that your vacation provides a lifeline for communities that are in danger of fading away along with the terraces that have earned this region its UNESCO listing.
Tailor made guided trips are also available where you have more flexibility on when to go, and what to do each day. Another great advantage about walking with local guides is that they can adapt itineraries smoothly  bad weather one day can be dealt with as easily as a particular trail being closed off for maintenance.
A small daily charge is payable for walking in Cinque Terre National Park  this will be included in your tour price. That money goes towards upkeep of the trails  neglect of the terraces along with rainfall in winter can lead to landslides, one of which has closed the famous Via dellAmore for some time. Responsible tour operators will ensure that their travelers help to reduce their environmental impact by sticking to marked trails and not scratching graffiti into cacti along the route  an irritating habit that some walkers believe adds to Cinque Terres romance! 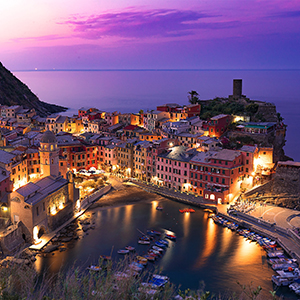 Cinque Terre travel guide
Three things everyone knows about Cinque Terre: there are five villages, theyre gorgeous, and they get stupidly busy. 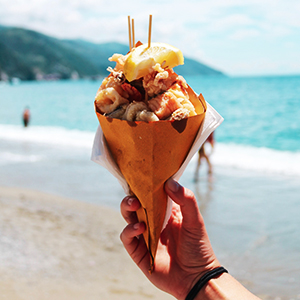 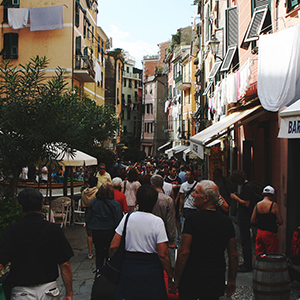 Contact us - call or email Call us from anywhere No queues or automation Sign up to our newsletter
Photo credits: [Page banner: Stuart Geiger] [Intro: Tangopaso] [Walking in Cinque Terre: Tangopaso] [Practicalities: Krigh]
Back to the top