As practical as it is romantic, a cruise along the Nile is for many travelers the finest way to explore the ancient sites of Egypt. But what exactly does this kind of trip involve, and what kind of vessel is right for you? Our guide to Nile cruise vacations will help you plot a course and put the wind in your sails.

The Nile has always played a vital role in Egyptian culture, trade and agriculture, which explains why many of the countrys most significant ancient temples and monuments were built alongside the river. Granted its not as peaceful as it once was, but cruising along the Nile still often feels as though youve stepped through a time portal into a more genteel age. Traditional felucca sailboats drift lazily alongside larger, more luxurious vessels, mooring up for guided excursions.

Egypt’s pyramids, temples and monuments aren’t just ancient. They’re really, really ancient. So what better way to discover them than by river, following a tradition thousands of years old?

On the shore, everyday rural life carries on much as it has done for centuries. Mud brick houses line both riverbanks, farmers till their fields with hoes and donkeys, and children splash gaily in the water. If youre on a small ship cruise, then in the evenings you can relax in air conditioned cabins, enjoy a sublime Nile sunset over a glass of mint tea, and watch as sites such as Karnak Temple in Luxor are brilliantly illuminated against the desert sky.
See all our Nile cruising Vacations 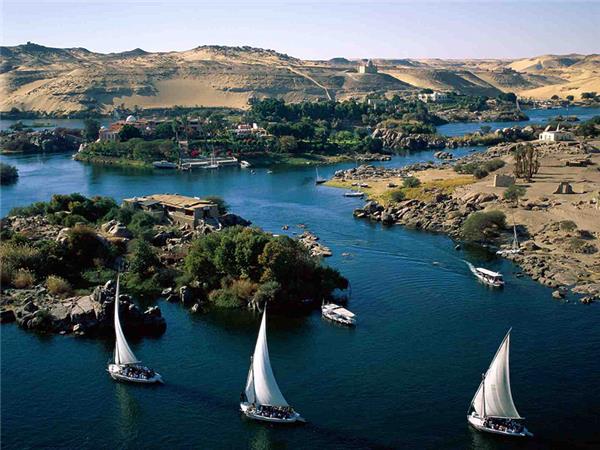 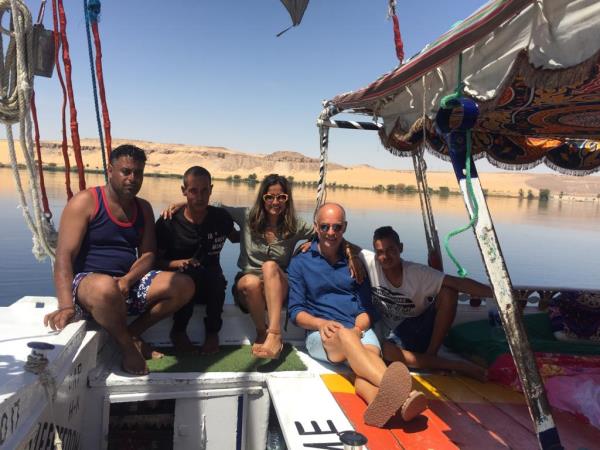 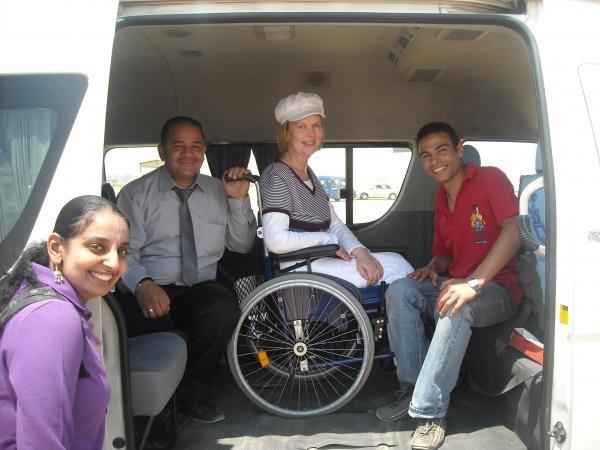 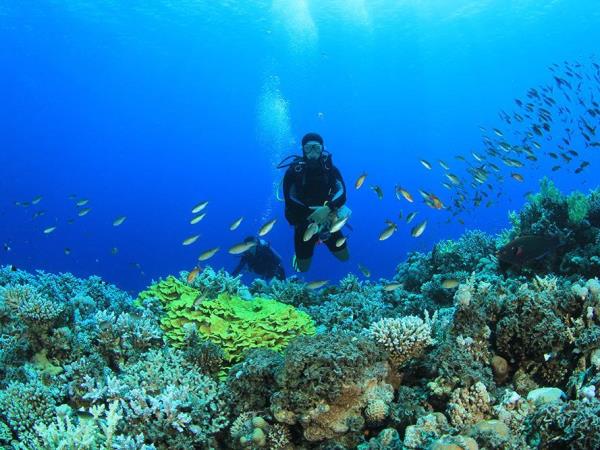 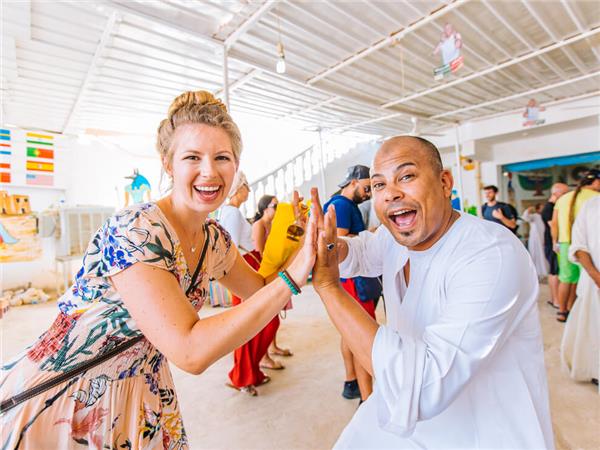 Experience the 'Land of the Pharaohs' on this exciting trip. 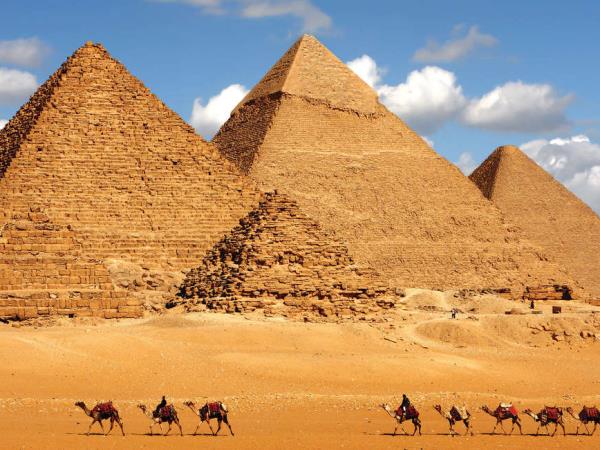 Archaeological sites like Pyramids and Great Sphinx of Giza 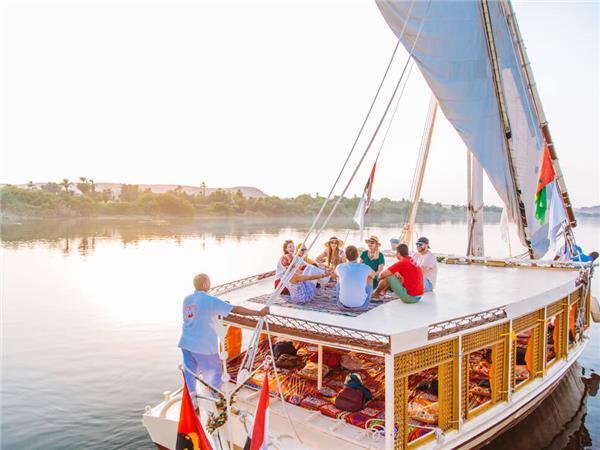 A fabulous introduction to Egypt 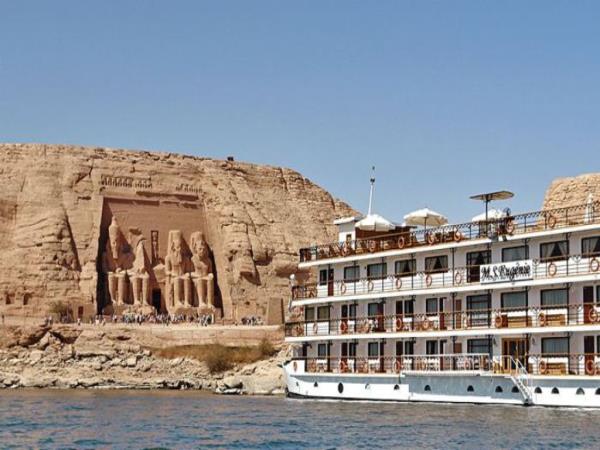 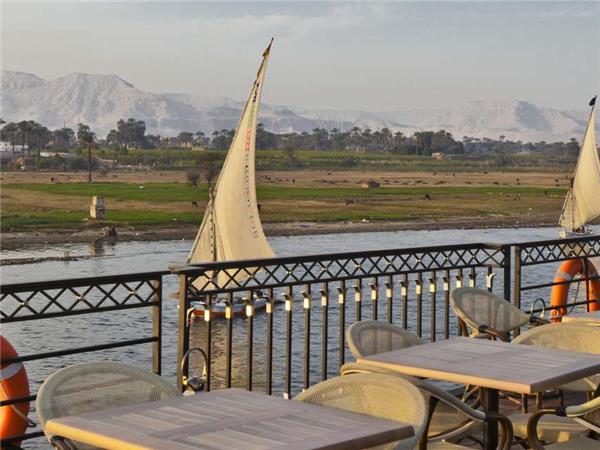 Discover some of the world's most remarkable archaeological sites 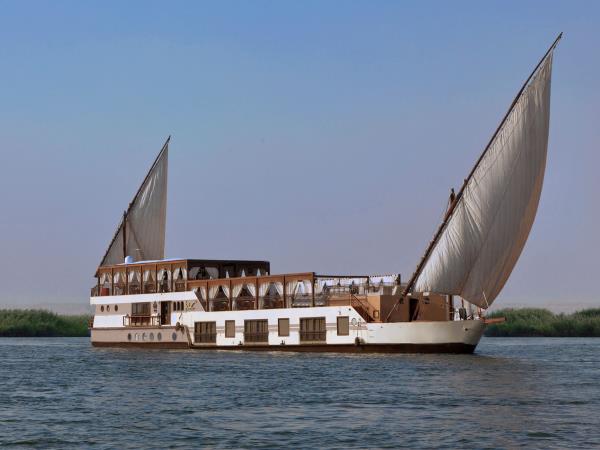 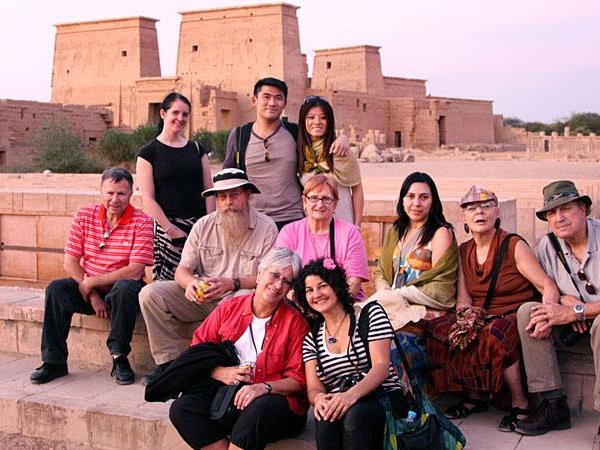 Culture, history and beaches of Egypt 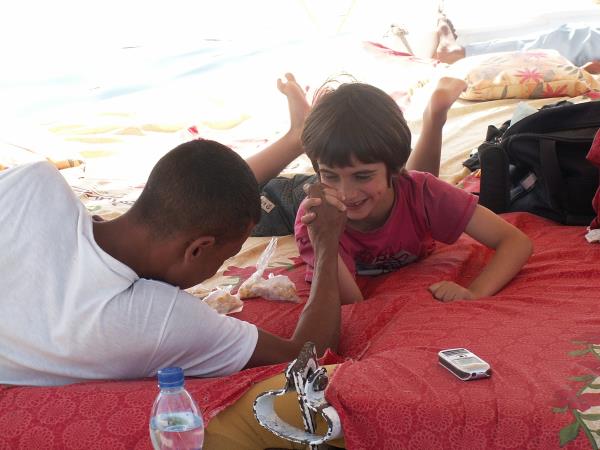 Nile cruise in Egypt for families 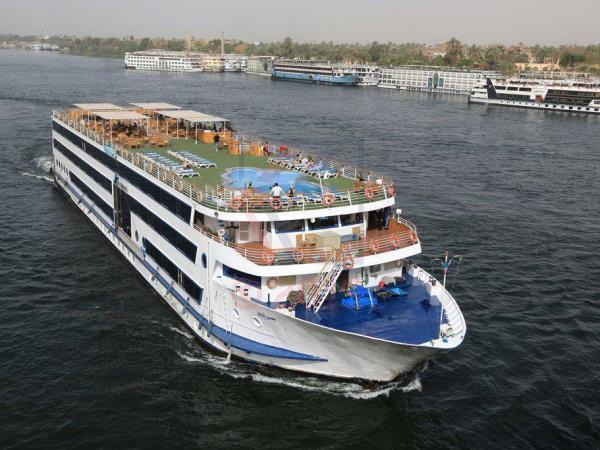 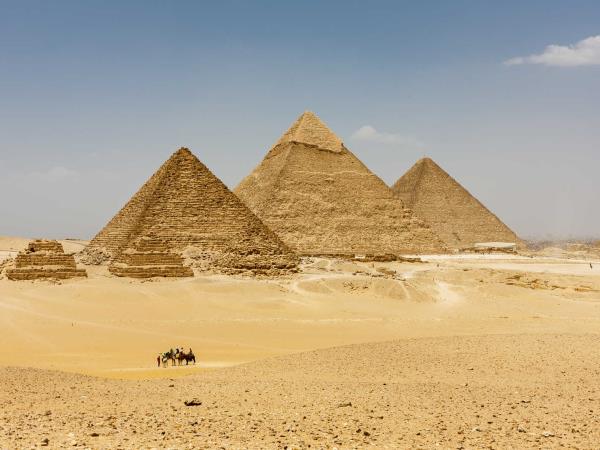 Pyramids and Pharaohs tour in Egypt

Fascinating insight into this ancient civilization 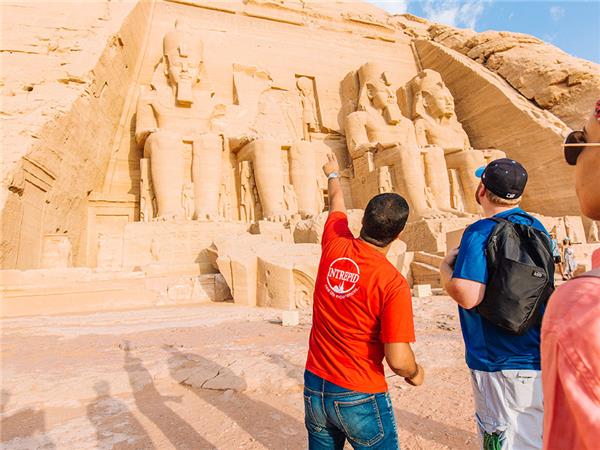 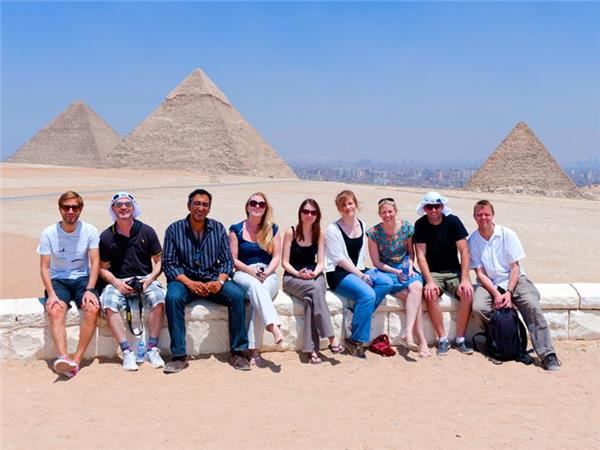 Egypt tour on a shoestring

What does a Nile cruise vacation entail?

What type of cruise should I take?

Boats have been used to transport goods and people – including Pharaohs – along the Nile for thousands of years. Today there are some 300 motorised vessels plying their trade between Luxor and Aswan alongside traditional, sail powered dahabiyas, dozens of tiny feluccas and the occasional steam ship. Each type of boat will give you a very different experience.
Small ship

The most common type of boat on the Nile, these floating hotels carry between 50 and 150 passengers, and can be very luxurious. Most are equipped with buffet restaurants and at least one bar, spacious en suite cabins and some form of optional nightly entertainment  belly dancing and fancy dress are de rigeur. They will also have a sun deck, and many have a swimming pool too. Small ship cruises often include a day or two in a felucca, and excursions to key sites such as Kom Ombo and Edfu that are often led by professional Egyptologists or archaeologists. Trips can span anywhere from three to seven nights, several of which are likely to be spent moored at Luxor and Aswan. Its always worth requesting an outside cabin, for better views.
Feluccas

These traditional wooden sailboats with white canvas sails are ideal for families and small groups, offering the flexibility of a tailormade trip. You might pause for a walk in the countryside, or moor up at an island to visit a Nubian village, in places where larger ships cant reach. Feluccas are cramped, and usually have no facilities onboard. Toilet breaks are taken on the shore, and passengers bathe in the river itself. But this is the classic style of Nile cruising, and a fantastic experience if you dont mind roughing it for a night or two. Mattresses are placed on deck to sleep up to eight or so passengers, and a canopy is raised for shade. Feluccas normally sail downstream from Aswan to Esna, so if theres no wind they can follow the current.
Feluccas
Dahabiyas

Resembling houseboats with sails, dahabiyas were most popular during the Victorian era, and are now returning to favour with those that enjoy a little glamour and luxury during their voyage. Dahabiyas are smaller than the motorised cruise ships, but are more comfortable than a felucca with often a very high standard of accommodation. They normally carry between 12 and 20 people, so theyre ideal for getting to know fellow travelers better over afternoon tea on the sun deck. Note that most dahabiya cruises travel from Luxor to Aswan, against the current. That means if there is no wind, they need to be pulled along by tug which can lead to delays.
Steam ships

There is also a small number of steam ships traveling the Nile, often historic vessels that have been carefully restored to provide a very stylish voyage. The Nile steam ship is, of course, most famously seen in Agatha Christies Death on the Nile.
Steam ships

See all our Nile cruising Vacations
Travel Team
If you'd like to chat about Nile cruising or need help finding a vacation to suit you we're very happy to help.

Feluccas are naturally the most eco friendly way to cruise the Nile, but a sailboat isnt always suitable. Youre at the mercy of the wind, and facilities aboard are at a minimum. Given that powered cruise vessels are often polluting in an industry that remains lightly policed, you can make a positive impact by booking with an operator that takes a responsible approach, and trying to reduce your carbon footprint such as by taking the train down from Cairo rather than flying.
Traveling off peak not only reduces pressure on popular sites, but makes for a more pleasant experience too. You can also opt for a trip that involves a visit to a Nubian village, providing valuable income for these communities.
Many Egyptians rely on income from tourism, and as the country emerges from several years of political instability, there is renewed interest in cruising on the Nile. Its not all good news though. An upcoming dam in Ethiopia is causing regional tension because, when completed, it is likely to substantially reduce water levels in the river as it flows through Sudan and Egypt. Its hoped that diplomatic efforts will be able to resolve the dispute, as conflict over resources in this region is a serious risk.

Egypt still has a long way to go when it comes to accessible travel. Some tours have been developed that are specifically tailored to people with limited mobility, involving wheelchair adapted vehicle transfers and cruise vessels. Larger cruise ships will sometimes have lifts between decks as well, and of course support can be provided to ensure smooth embarkation and disembarkation. But its important to remember that most of these historic sites are not at all set up for wheelchair access.

Best time to go on a Nile cruise

Egypt has two seasons: a baking hot summer, and a milder winter. Sometimes the only way to tell the difference is the temperature, as it barely ever rains, especially in desert areas.

Between May and September daytime temperatures are often oppressive. On the river breezes can conceal how hot the sun actually is, so sun cream and wide brimmed hats are essential. On the rare occasions that it rains, showers never last for long, so the only umbrella youll need is for shade. Temperatures fall a little at night, so on felucca cruises sleeping bags are useful  many crews will also provide warm blankets if youre sailing in the winter. 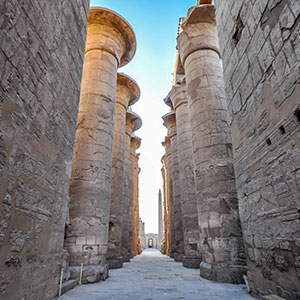 Nile Cruising map & highlights
Temples and monuments preserved by the sands of time, and the spectacular evening light shows that illuminate them, are certainly entrancing. 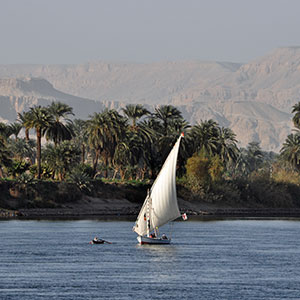 How to choose a cruise on the Nile
Nile cruises are a chance to see another side to Egypt: dusty settlements crowned by ornate minarets; buffalos cooling off in the shallows; farmers guiding donkey carts along the banks. 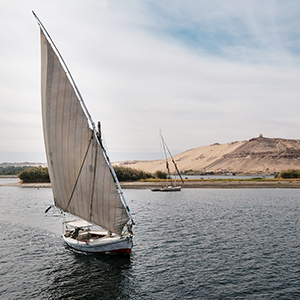 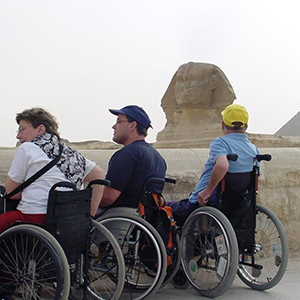 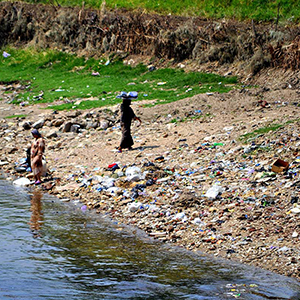 Our Egypt travel guide is designed to help you get the most from your Egypt vacation, with useful sections on what we rate (and what we dont) sitting alongside a brief history of Egypt and lots of handy information on food, shopping & people. Read on for a contemporary take on one of the world's oldest civilisations.